Russia is a large country spanning across Northern Asia and Eastern Europe. It is the largest country in the world in terms of land area covering one-eighths of the total inhabited area on Earth. The country is spread over 17,125,200 kilometer square of area. It is the ninth most populated country in the world with a population of 146.79 million as of 2019. Most of Russia, about 77%, is in Asia with the rest 23% in Europe. 4.2 million tourists visited Russia in 2018. The Chinese were the largest in numbers followed by the Germans and South Koreans.

The country has the twelfth largest economy in the world as per the GDP world rankings. It is a formidable political power in world politics with the largest stockpile of nuclear armaments and massive oil and natural gas reserves. The Russian capital Moscow is the third largest city in Europe boasting a massive economy and covering 2511 square kilometers. St. Petersburg is the other major city that attracts thousands of tourists ever year for its palaces and cathedrals.

Russia has always remained somewhat shrouded in mystery. The communist government and political ‘iron curtain’ had prevented much travel. Language is another barrier that people from the western world face while travelling in Russia as they have their own Cyrillic script and language. However, the country still has a lot to offer to travelers in terms of nature, culture, architecture and history. 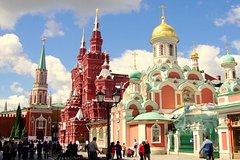 From USD $0.00
Book Now
The largest freshwater and deepest lake in the world, Lake Baikal, is in Russia.

Most travelers from western countries (Europe and Americas) require a tourist visa to travel to Russia. Some countries of Asia, Latin America and South Africa have visa-free entry into Russia for a specified period. Applicants from specific countries can apply for e-visa to travel to certain parts of Russia. To know whether or not your country is in the list for e-visa check https://www.visitrussia.org.uk/visas/getting-a-russian-visa/

Here are a few other things to note:

Russia does not allow visitors to bring in, leave with or transit carrying the following types of items:

You will also need special permission from certain government departments of Russia to bring in items like: radio communication devices, firearms, weapons, over 250 grams of caviar. You are allowed:

No airport tax is levied for entry or exit into Russian airports.

Russia can be accessed by many modes of transport. You can enter Russia through air, water and land. There are bus and train services, flights and even boats/ferries to get into Russia.

By Air – Moscow has direct flights to almost all major countries. Apart from the official airlines, there are a number of low cost airlines from European cities, Middle East and South East Asia and even Australia. St. Petersburg, Ekatarinburg, Vladivostok and a few other cities also have international airports but with limited flights.

By Boat – There are ferry services connecting Russia’s Sochi to Turkey and Vladivostok to Busan and many Japanese ports. Cruise ships also visit different Russian ports.

By Car – Barring some delays in border checks, getting into Russia by car is a good option. The road quality is good, car rentals are easily available, prices of gas or petrol is low and highways safe as they are police manned. But distances are huge.

By Train – Moscow and St. Petersburg have rail connections to all major cities of Europe. High speed as well as normal trains directly connects Moscow to other European cities. Moscow also has connections by train to other Asian cities like Beijing, Ulaanbataar and even Pyongyang.

The Trans-Siberian is the longest railway line in the world, crossing 16 rivers, 87 cities and 8 time zones.

By Planes – Russia is a huge country, with train travel taking more than 2 days. Almost all tourist destinations have airports and have regular internal flights connecting Moscow and other cities.

By Bus – Russian cities are interconnected by the bus service. But traffic jams are quite common, thereby enhancing the time of travel. But there are places where there are no trains or planes and buses are the only options.

By Car – Cars can be shared and there are taxis too. App based taxis are also available. 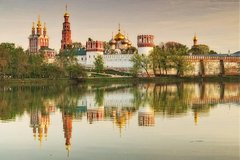 Many distinct climatic types mark the length and breadth of the country. Most of the country enjoys a continental type of climate which means warm summers and bitterly cold winters. Rain showers are few and far between in the summer months making it a great time enjoy the great outdoors. Apart from southern Russia the rest of the country has white winters with lots of snowfall.  Spring and summer months are the best time to travel to Russia. May to October is the official tourist season. The majority of this vast country has a continental type of climate where summers are hot and dry and winters are severe with a lot of snow and below freezing temperatures. The western region of Russia enjoys more rain than the east. The steppes in the south and southeastern parts of Russia are very dry with rainfall of less than 200 millimeters annually. In most parts of Russia from mid-October to Mid-March there is snow on the ground. Winter temperatures in Jakutia, Siberia have been known to record world record lows at -50 degrees Celsius. Oymyakon in Siberia is the coldest town inhabited by humans. Here are some of the weather statistics from important Russian cities.

There are 12 active volcanoes in Russia.

Summer is the popular tourist season for visiting Russia but the country is beautiful all year round. Here is our seasonal guide to help you decide the best time for you to make your trip to Russia.

Russia on a Budget

8 on Claymore Serviced Residences - By Royal Plaza on Scotts